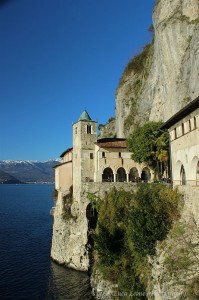 From Laveno to the Hermitage of Santa Caterina by boat

Until 12 October the Navigation System of the Lakes has reactivated the navigation Laveno-Hermitage Santa Caterina, the 14th-century monastery perched on Lake Maggiore.

Although accessible by land, a visit to the charming historic location is even more striking if you come by boat from the Lake.

With a few euros there are several departures to and from Santa Caterina, close-up distances from 9.30 a.m to 6.30 p.m., from wensday to sunday.

According to tradition the monastery was founded by Alberto Besozzi, a wealthy local merchant, escaped to a downpour during the crossing of the Lake, decided to retire on that stretch of coastline and lead you life as a hermit.

After several passages of property and management, the monastery, which from 1970 is of the province of Varese and was held from 1986 to 1996 from a Dominican community, today went to the Benedictine Oblates.

Grappas and liqueurs of Angera

This website uses cookies to improve your experience while you navigate through the website. Out of these, the cookies that are categorized as necessary are stored on your browser as they are essential for the working of basic functionalities of the website. We also use third-party cookies that help us analyze and understand how you use this website. These cookies will be stored in your browser only with your consent. You also have the option to opt-out of these cookies. But opting out of some of these cookies may affect your browsing experience.
Necessary Always Enabled
Necessary cookies are absolutely essential for the website to function properly. This category only includes cookies that ensures basic functionalities and security features of the website. These cookies do not store any personal information.
Non-necessary
Any cookies that may not be particularly necessary for the website to function and is used specifically to collect user personal data via analytics, ads, other embedded contents are termed as non-necessary cookies. It is mandatory to procure user consent prior to running these cookies on your website.
SAVE & ACCEPT
Nach oben scrollen