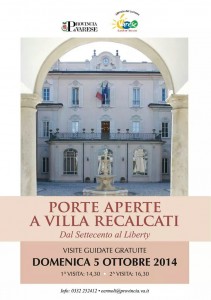 On Sunday 5th October Villa Recalcati opens its doors to citizens and tourists for two free guided tours to know the history of Liberty Art.

Villa Recalcati is one of the best examples of eighteenth-century suburban architecture in the province of Varese. His first group was actually erected in the second half of the seventeenth century, which country house of the noble milan family Recalcati.
After a series of property steps, the villa was inherited by Fr. Giuseppe Melzi who later sold it to Giovanni Battista Morosini, under whom it was transformed in 1874 in “Grand Hotel Excelsior”.

Soon the hotel became one of the most important and famous of North Italy, attended by personalities such as Verdi and Gabriele D’Annunzio, but with the decline of the tourist market in the aftermath of World War I, in 1927 came the failure.
The Villa was bought in 1931 by the newly formed province of Varese, which turned into its headquarters offices that still houses today.

The times of Sunday 5 October visits are as follows:

The reservation is not required.

Participants will be offered a welcome tribute town.

On the edge of reality